Since I was a teenager I wanted to become a programmer because I always wanted to create games. I started with very simple stuff in BASIC and continued with C, C++ and C#. However, as I grew older I realized that working with graphic engines and vector modelling was nothing I was good at or wanted to do for a living. However, I did not want to give up the dream of creating games and so I started to develop simple point and click adventures in which I could work with prerendered models and background. However, that was not enough for me and at some point I discovered the old RPG Maker 95. The stuff you could do there was very basic and nothing you could build a really fancy game on. While I focused my studies on something else than game devolpment this was always something I kept in my mind and over the years I built small stuff with the different versions of the RPG maker. As time went on and new versions were released I realized that with the possibility to use your own LUA scripts it was possible to create something else than point’n’click games with acceptable graphics. For a while I worked with the XP version of the maker and stopped then completely for a few years.

And then it hit me – the perfect idea for a game. The perfect storyline. The gameplay. The puzzles. The characters. It was all there and I spent hours to write everything down, checked it for plausibility and started to think about how I could bring it to life.

Unfortunately some things never change and I am still very bad with graphic engines. My LUA abilities however were at least somewhat acceptable and I knew that I could improve there. So I looked up the newest version of the RPG Maker VXA, created a few small projects to get back into it and decided to just go for it.

You want to know about the best modern tile sets? Read here!

But now I came to a new problem. While I am simply not good with graphic engines it is very possible that I have the worst drawing skills of every single person alive. For that reason I either needed to find someone who would creater tile sets for me or find some that would suit my needs. My game will take place in the current era – and it shouldn’t be so hard to find a fitting tile set for that, right?

Wrong. I spent hours over hours to find modern tile sets that would really LOOK like a modern city. Yes, I found a few for houses, but the graphic style was simply… not right. And this was all I found – houses. No interiors. After a while I realized that I would have to pay for the stuff I needed and so I found this on Steam. The price was not really high and I decided to give it a try. I am glad I did, because the stuff there is really great. I can use a lot of it, but it was simply not enough for me. I could not start with only this. And so I created a few maps, started with programming but came to the conclusion that I needed additional resources. I did not find them and so I put the whole project to rest again. 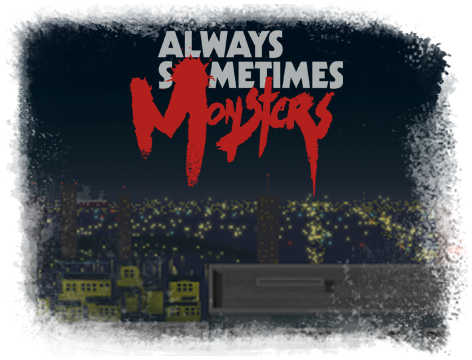 Yesterday I stumbled over a game called Always Sometimes Monsters. I haven’t finished it yet, but while playing the first hour I could not stop thinking about how glad I would be if I could get my hands on those tile sets. (This is how far it has gotten already – I’m playing a great game and all I can think about are my tile sets.) They were EXACTLY what I needed. They. Were. Perfect. And then I actually found them on Steam. Expensive? Yes. Worth it? Absolutely. As long as you are not planning to do some parallax mapping these are by far the best modern tile sets you can get your hands on. I mean seriously, they even have little beds for cats, computers and coffee machines. If you want a preview of how the tiles look, either buy the game (it is really good) or have a look at the video below.

If YOU happen to have or know of any resources for modern tile sets, please let me and all other readers know in the comments!